Sydney man Clinton Maynard has been hospitalised in a critical condition following an accident mixing chlorine for his backyard swimming pool.

He was preparing to correct the water of his aboveground pool with a shock treatment, following advice from his local pool shop after the pool had gone green.

On the advice of the retailer, he used two kilograms of stabilised granular chlorine and premixed it with water.

He used a bucket that was reserved only for mixing chlorine, and had never been used for other chemicals.

However, he was never told to put the water in first – either verbally by the pool shop, or on the chlorine packaging.

“The pool had gone green and we went to the pool shop and were advised to do a shock, add an algaecide and also a flocculent,” says Maynard.

“They said we’d need to use two kilos of chlorine. The bucket was the same one we always use for mixing chlorine, and the same mixing stick. We never use the bucket for anything else and there was nothing else in it at the time.”

His wife put the chlorine in the bucket and then went to put one of their children to bed.

“About five minutes later I came and poured some pool water into the chlorine in the bucket and started mixing it. Within about 30 seconds to 45 seconds there was an explosion, and then a series of explosions.

“The blast was very loud and luckily our neighbours were next door. They ran over and hosed me off and got my clothes off me. They saved me from burns and saved my eyesight. They called an ambulance and the paramedics put an apparatus on my eyes and washed each eyeball with ten litres of water.”

Maynard was rushed to hospital in critical condition and five others were also injured.

“In all, six people were taken to hospital. I was critical, but also my neighbours, my wife, the fire-fighter who hosed me down and the paramedic all had to go to hospital. That’s how big it was. Even the dog had to go to the vet.”

Maynard later saw an ophthalmologist who was surprised that he wasn’t blinded by the incident. In the end, his eyesight was okay.

“But my lungs were damaged and that doesn’t reveal itself immediately, because the chlorine fumes affect the lungs a bit like a bruise. My lungs aren’t 100 per cent but there’s no long-term damage. I still have a cough but it will come good in a couple of months.

“I really want to get the message out there that these chemicals are dangerous and need to be handled with care.”

Maynard stresses that he takes full responsibility and I doesn’t blame anyone.

“But people need to be told how to use it properly. There should be clear instructions about putting the water in the bucket first, and you should also get verbal advice from the pool shop at the time you buy the chlorine, pointing out the instructions and letting you know it can be very dangerous if it’s not done correctly.”

The fire brigade took the bottle away and he can’t remember the exact brand of chlorine. Therefore he can’t check to prove he read the instructions properly, but from what he recalls, the instructions were pretty vague. He later checked the instructions on some chlorine packaging in a supermarket shelf, and says they didn’t have any warnings at all.

The fire brigade did find some evidence of acid in the mix, but as stabilised chlorine has a cyanuric acid component, it may be a result of that.

Maynard is a broadcaster for Sydney radio station 2UE, and has been using the airwaves to spread the message of safe handling of pool chemcials.

“I am very lucky to still have my eyesight and not to have permanent lung damage,” he says. “But others might not be so lucky.”

The incident occurred in December.

Advice on safe handling of chemicals

• Chemicals can be dangerous goods and should be handled with care.
• Always read the instructions on the packaging.
• Always add chemicals to water, not water to the chemicals. This is because chlorine dust can blow back if water is poured into the chlorine, and that can be very dangerous, potentially permanently damaging your lungs.
• Never use the same bucket for different chemicals. Have a different bucket for each chemical.
• Never mix chemicals and never mix liquid chlorine with dry chlorine – that has the potential to cause an explosion. 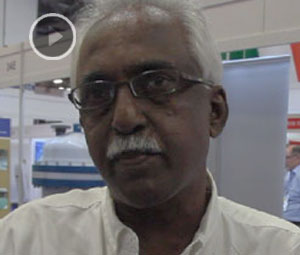