The National Drowning Report for 2019 presented by Royal Life Saving highlights research and analysis of fatal and non-fatal drowning across Australia between 1st July 2018 and 30th June 2019. During this time, 276 people lost their lives to drowning and they estimate a further 584 people experienced a non-fatal drowning incident.

The 31 drownings in swimming pools represent a 16 per cent improvement over the previous period (36 drownings) and a 23 per cent reduction compared to the 10-year average.

In the critical 0-4 age group, there was a 12 per cent increase over the previous period (19 drownings compared to 17 previously) but that number was still represented a reduction of 30 per cent over the 10-year average of 27 drownings. 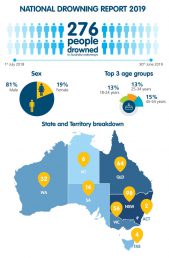 Consistently low numbers of drowning deaths in children in recent years are encouraging, showing that Keep Watch messages, which highlight the importance of active supervision, physical barriers to water and water familiarisation, are hitting home and helping to keep children safe.

Justin Scarr, Australian CEO of the Royal Life Saving Society says that their work continues to focus on understanding the impact of both fatal and non-fatal drowning.

“Through this work, we aim to educate, inform and advocate best practice, working with partners and policy makers, to develop robust national drowning prevention and water safety strategies,” he says. 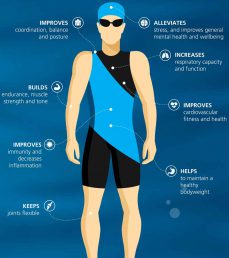 Recent research from Royal Life Saving investigated swimming and water safety skills of children aged two to 15 years old attending lessons at commercial swim schools, outside of school or vacation-based programs across New South Wales, South Australia, Victoria and Queensland between July 2014 and December 2016. This research provided insights into the skills being taught in commercial swim schools and the achievements in relation to the Framework.