Murder and manslaughter charges over US waterslide death 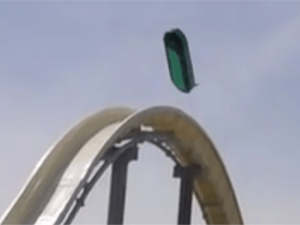 Schlitterbahn is defending the charges, saying it is disappointed any individual has been charged and that much of the evidence is taken from a scripted reality TV show (see below).

Caleb, son of Republican state representative Scott Schwab, was decapitated after his raft went airborne from the 17-storey waterslide Verruckt at the Kansas City waterpark. The Schwab family reached settlements of nearly $US20 million with Schlitterbahn and various companies associated with the design and construction of the waterslide.

Miles and Schlitterbahn Waterpark of Kansas City, Kansas, have been named as co-defendants and according to the indictment document sighted by ABC News, Schlitterbahn was indicted on one count of interference with law enforcement (concealing evidence) while director of operations Miles was indicted on 20 felony charges including the above charge and an additional charge of interference with law enforcement (obstructing official duty).

Following the laying of those charges,  the Chicago Tribune has reported that Henry, 62, co-owner of Texas-based Schlitterbahn Waterparks and Resorts, and designer John Schooley were charged with reckless second-degree murder in the death of Caleb Schwab. The indictment also charges them with injuries to 13 other people on the slide. Second-degree murder carries a sentence of 9 years to 41 years.

The company that built the ride, Henry & Sons Construction Co., which is described as the private construction company of Schlitterbahn, also was charged.

The death prompted the approval of a law last year in Kansas that prohibits self-certification of rides by amusement parks.

This indictment, as in the previous one related to Tyler Miles, is wrought with references to the outtakes of a dramatic, scripted television show, and filled with information that we fully dispute.  Jeff Henry has designed waterpark rides the world over.  Nearly every waterpark that exists today has an attraction or feature based on his designs or ideas.

The incident that happened that day was a terrible and tragic accident. We mourn the loss of this child and are devastated for his family. We know that Tyler, Jeff, and John are innocent and that we run a safe operation – our 40 years of entertaining millions of people speaks to that.

We are confident that their innocence will be proven in court where we know the facts will show this was an accident.

We were shocked by the allegations being made by the Kansas Attorney General about Tyler and our KC park. The allegation that we operated, and failed to maintain, a ride that could foreseeably cause such a tragic accident is beyond the pale of speculation. Many of us, and our children and grandchildren, have ridden the ride with complete confidence as to its safety. Our operational mantra has been and will forever be Safety First.

The accusation that we withheld information or altered evidence is completely false. We have operated with integrity from day one at the waterpark – as we do throughout our waterparks and resorts. We put our guests and employees safety first; and safety and maintenance are at the top of our list of priorities.

Since the date of the incident we have worked closely with law enforcement; at no time have we withheld evidence; at no time have we altered evidence. The indictment uses quoted statements from a reality TV show that was scripted for dramatic effect that in no way reflects the design and construction of the ride.

Quotes were purported to be from definitive design meetings, when they were, in fact, “acting.”

During the civil matter, attorneys involved noted that we cooperated fully, provided thousands of documents, and that nothing was withheld or tampered with.

In fact, the indictment presented is so full of false information that it has shocked the Kansas legal community, as you can see in the statement from Tyler Miles’ attorneys below.

Our legal team will be speaking out against each of the allegations point by point in the coming weeks and months. Rest assured, we stand behind our staff and all our parks. We will be fighting these charges aggressively. We know that Tyler is innocent and that we run a safe operation – our 40 years of entertaining millions of people speaks to that.

We look forward to proving this in court where we know the facts will prove this was an accident.

The suggestions that C.S.’s death was foreseeable to Tyler Miles, that, with this knowledge Tyler “avoided or delayed repairs,” and that Tyler “had covered up similar incidents” are simply not true. Not only had Tyler ridden the slide numerous times, but, as the State is aware, he had scheduled his wife, to ride it on the day of the accident. These are not the actions of someone who believed the ride to be dangerous.

The allegation that Tyler knowingly obstructed the investigation is, likewise, false.  From the moment of the accident, and continuing until the charges were filed, Tyler cooperated with law enforcement. He did not hide or destroy documents.

The Constitution requires that an Indictment be based upon legal evidence – not speculation or conjecture. This Indictment is based upon Grand Jury proceedings, which are conducted in secret. While neither we nor the public have had an opportunity to see transcripts of Grand Jury witness testimony, the Indictment is littered with references to evidence that is not legal.

Only after Tyler is able to obtain transcripts, witness statements and police reports will he, like any citizen, be in a position to fully address these allegations. What we know is that Tyler is innocent, which is why he insisted, at his first court appearance, that we set the matter for jury trial. We look forward to the opportunity to challenge the evidence, in a public forum, and prove Tyler’s innocence.