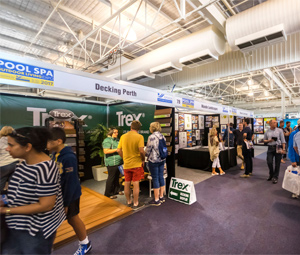 SPASA WA has held its first Pool, Spa & Outdoor Living Expo on September 9-10 at Claremont Showgrounds after acquiring the business from MH Nominees earlier this year.

“Visitors to the expo have again shown that having a backyard swimming pool or that dream backyard is part of the Western Australia way of life,” says Steele, adding that it is a little known fact that Perth leads the way in private pool ownership.

“A 2015 Roy Morgan survey shows 18 per cent of all Perth residents live in a household with a swimming pool, well above the national average of 12 per cent,” he says.

The expo showcased swimming pools, spas, landscaping and services directly to the public, all under the one roof. An extensive marketing plan was put in place to ensure the expo was a success.

“What became evident is that even during the current tough times that are been experienced in Western Australia, owning a pool or spa is still high on the agenda,” says Steele. “This was proven by the fact that more than 70 per cent of visitors were first-time attendees to the expo, and 60 per cent of them were there to view swimming pools.”

He says that the SPASA Pool, Spa & Outdoor Living Expo not only generates overall promotion to consumers, but also provides significant benefits for exhibitors.

The next Pool, Spa & Outdoor Living Expo will be held at Claremont Showgrounds March 10-11, 2018.