Peter Wallace has stepped down as managing director of AstralPool Australia, replaced by Matt Adlam in accordance with the company’s long-established succession plan.

Wallace will remain involved with AstralPool through the North American business and global product development, as well as retaining board positions in both Australia and America.

The November announcement was made following the October launch of the state-of-the art factory in Melbourne.

Wallace says he has driven the business hard, and driven himself hard as well, over the 26 years since the formation of Hurlcon back in 1990. Spanish multinational Fluidra bought Hurlcon from Wallace and Brad Weir in 2006 to create AstralPool Australia.

“This business has taken six or seven days per week for 26 years and I’ve never had more than two weeks’ holiday in a row,” he says. “I wanted to pull back and not work the hours I had been working and spend more time with my family, and eventually we came to an agreement where I can still be involved in a different capacity.”

In 2010 Wallace had moved to Queensland in part as a move to step back from the day-to-day running of the business, but even though the company kept growing, the hard post-GFC years meant he needed to remain actively involved.

Now he believes the time is right to step back.

“We have the new factory; we have a growth rate that’s averaged over 20 per cent year-on-year for 26 years; and the team that’s running the business is just as hungry as I was. Matt’s ready, the team’s ready, and with the opening of the factory I started to realise the staff around me had more energy than I did.

“They need acknowledgement for their efforts and it was time for me to step back. I never wanted to be a silly old duffer hanging around taking credit when things go well, and if they go poorly, never accepting it might be to do with me.

“Matt is now managing director and chief executive officer which was always in the succession plan. He’s been the general manager but now he’s the CEO of the Australian business, and he’s more than ready – in effect this has been a six-year handover period.

“Most of those people around him – in finance, production, sales – have been around him for 10 or 15 years.”

Wallace says while he’s not retiring, he will be living a little differently now.

“I’m more relaxed now than I have been since I can remember and I’m enjoying what I’m doing. We’ve got two and a half acres in the Dandenongs and I love the gardens. Also, I have a couple of other business interests and some other advisory positions outside of the pool industry that I can spend some time on.”

He says that to succeed you have to have a great team around you and they’ve got to want to follow you.

“But to do that you’ve got to lead by example, and inspire them to go above and beyond. It’s time to pass that on to someone else now.” 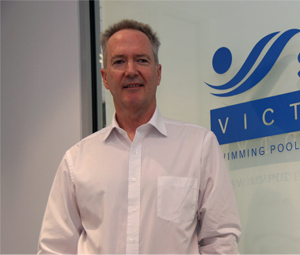