It may be cold and it might be winter … but that’s not stopping 15 Swim Australia registered swim schools kick starting the World’s Largest Swimming Lesson, this Thursday the 18th June, 2015, at 10am AEST.

World-wide, more than 800 facilities and registered swim schools from around 22 countries, will take the plunge, mid-morning local time on June 18, all teaching the same lesson at the same time in order to qualify for the Guinness World Record.

For the first time, the World’s Largest Swimming Lesson (WLSL) will be held at 10am in the local time. Previously, the event had required a simultaneous start time at 3pm GMT which made it virtually impossible for host facilities in Australia and New Zealand to participate.

The new schedule was made specifically with Australia and New Zealand in mind, as well as nearby Asian countries.

Last year, for example, the start time of 10am would have meant local swim schools would have had to run the swim at 9pm in the middle of winter! Hardly a conducive time for getting nippers along for a swim. While the event is still being held in our winter, at least it will be in the daytime.

With this new schedule, the WLSL is hoping to see considerable growth in our region.

Over the past five years, Team WLSL has set five Guinness World Records (GWR) for the World’s Largest Swimming Lesson, with 36,564 swimmers from 22 countries participating in 2014. More importantly, the WLSL has spread the vital message that Swimming Lessons Save Lives through more than 150 million media impressions.

Since the first event in 2010, more than 120,000 people have participated in WLSL events and millions of individuals have learned about the vital importance of teaching children to swim to help prevent the leading cause of accidental death of children under five years of age.

SPLASH! is a proud supporter of the World’s Largest Swimming Lesson. 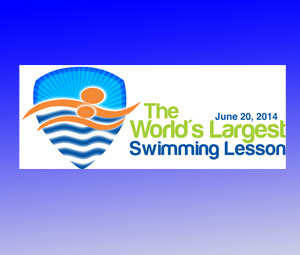